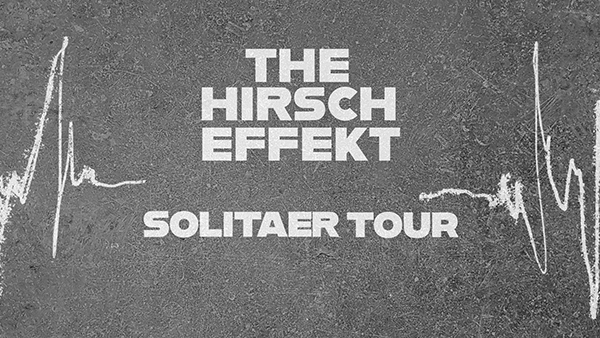 The Hirsch Effekt return to the European stages with a new album.
„Kollaps“, the fifth album by The Hirsch Effekt encounters everyday madness with elaborate counterpoints and ludicrous lyric lines.

After their last album „Eskapist“ (2017), which charted #21 on the German album charts, and formidable show-offs at Wacken Open Air, Full Force Festival and as recent headliners at the renowned Euroblast Festival, The Hirsch Effekt have now spawned their new ogre. Musically, the trio from Hanover, Germany, has once again settled in the microcosm of progressive metal and enhanced their songs with their typical trademark of – at first glance totally out of the line – genre-hopping.
The German lyrics, that by now – due to the band’s steadily rising popularity also in international territories – are also sung by international audiences have become less a barrier but far more a unique feature, that sets them apart from other takers.

On the actual concept album, the band slips increasingly into the roles of other, social actors to reflect the aspects of their agenda: a dispute with the systematic collapse is thematized from the perspective of the „Fridays For Future“-movement, depicted in a musical dainty or a bizarre way, then again also to corrode opposers in a strobe-like manner.

Similar as on previous records, it’s executed once again by Hirsch-style chopping of parts, bits and beats, that first off felt safe and usual. In between chorals resound, helping to find one’s way back to a necessary recollection. On the one side it’s a euphonious, on the other side a hurting listening experience that leads to a heightened perception of the exposure of the human disorientation, and serves as a call to the solitary consciousness of courageous individuals – to gather together at concerts.

Live, this symbolic demise is celebrated purification. This can be experienced together with the fans at upcoming shows, by the way of indulging unison and clamor, questioning oneself whether the own heart and thoughts have gone prone to egoism or still are in line with the harmony of hope, that is hidden within „Kollaps“.